The Peoples Democratic Party (PDP), has requested that former Chief of Army Staff, Tukur Buratai return back to Nigeria to face his pending N1.8bn fraud investigation.

In a statement signed by PDPs spokesman, Debo Ologunagba, he stated that looting of funds meant for the fight against terrorism is of grave national concern.

“PDP standing with Nigerians insists that Gen. Buratai should return to the country and personally face investigation to clear his name.

“This is because any allegation bordering on the looting of funds meant for the fight against terrorism is of grave national concern and consequence.

“It must be thoroughly investigated and anybody found wanting must be made to face the full weight of the law no matter how highly placed,” the party wrote.

Recall, ICPC raided General Buratai’s house in Wuse 2, Abuja, on June 16, recovering the sums of N175,706,500 and $220,965 along with cars and several designer wrist watches, including three Rolexes.

PDP went further to accuse APC of letting the case against the embattled Accountant General of the Federation (AGF) die down.

“Moreover, the recently exposed looting of N80bn by the suspended Accountant General of the Federation, Ahmed Idris, which investigation has now gone cold is suspected to have been engineered by the cabal at the very high level of the APC administration,” PDP stated. 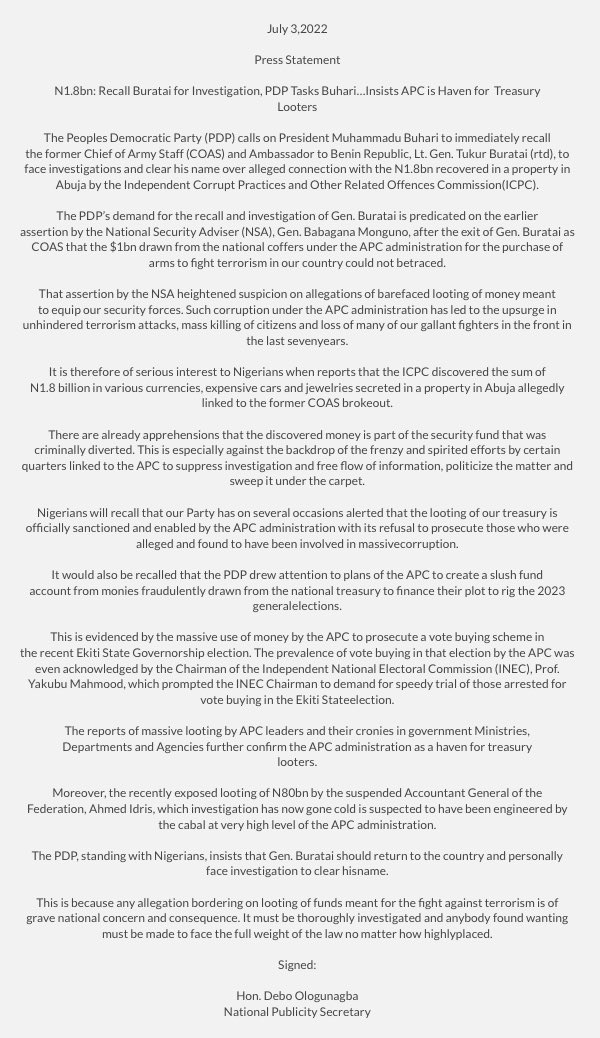